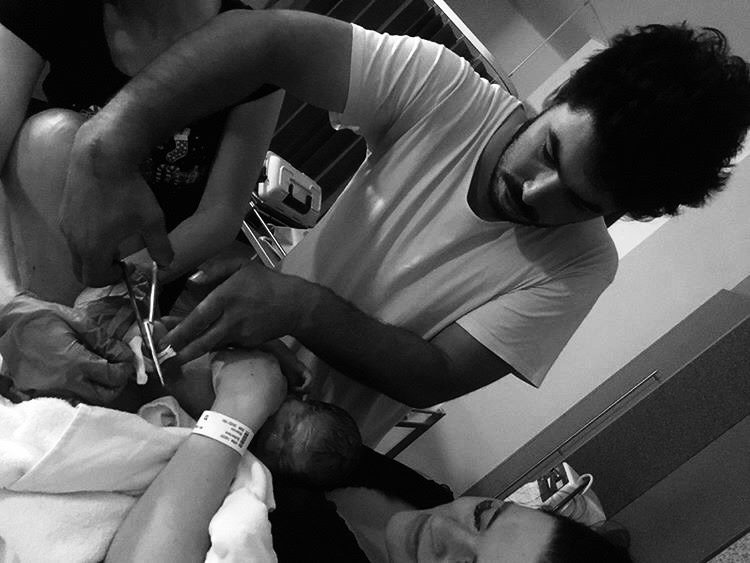 “At 11.30pm on the 18th of December I heard my waters pop lying in bed. A huge rush of excitement came over me knowing our little boy is on his way. How long that would take was anyone’s guess..

After quick a shower and change of clothes later the surges came on rapidly. From 5 minutes apart, lasting one minute, to developing to 3 mins apart within a 15 minute period.

They were quite powerful with no build up. I was listening to my body and knew that we would meet our little boy sooner rather then later. Jay was supporting me through calm breaths and surge breaths as they rapidly grew stronger and more intense, faster then expected. Although Jay wanted me to try stay home and labour I knew that he was coming. We called the midwives, who were sure labour was going to take its time as I sounded very relaxed over the phone and it was not long after my membranes had released.

They advised us to come in for a check anyway and we decided to stay home longer… that wasn’t the case. Within 30 minutes of the release we were in the car on the way, I felt heavy pressure and almost felt ready to push. Learning to listen to my body was the best thing I could of done.

We got to the hospital within 10 minutes (12.30am roughly) listening to rainbow relaxation in the car. When we got to the hospital the surges had ramped up and I took the long walk to the birth suite. Once I got through the door of the ward the surge finished and I was able to get the reception desk calmly. I don’t think the midwives realised how far along I was. They counted my contractions and with how close they were the midwife took me to the birth suite. At that point I felt pressure in my behind and what I could only describe as an uncontrollable urge to bare down. When we got to the room the midwife was brilliant. I told her I was HypnoBirthing between a surge and she knew exactly what to do.

Jay set up the music and dimmed the lights. The midwife asked me if I wanted to be checked for dilation and at the point I felt like I wanted to know as pushing urges were building up. she checked me and I was already 8cm. Within 1 hour and a half of my membranes releasing I had dilated fast.

This actually gave me a lot of strength and confidence that I can listen to my body and it’s urges. We continued to labour and I felt I was in a calm environment ready to birth my son. Our midwife was non invasive, was positive and gave me to power to push when I was ready. She told me to trust my body and to go with any urges I felt to push. I didn’t have a chance to get into a bath, use my diffuser or even share with the midwife my birth plan. It didn’t matter. I was safe, comfortable and being supported by my partner. I laboured on my feet and had my arms around Jay and it felt really comforting for me and I was able to relax in his arms between surges. Around 2am I was ready to push. That was the point of the birth that was really powerful and out of body for me. My mum and mother in-law were outside the suite at this point and hearing their voices gave me more strength. It was perfect timing. I felt having them beside me witnessing the birth of their first born grandson gave me the power to do this.

I was so excited to meet my man.

I got up on the bed on my hands and knees using the bed head as a support with Jay beside me. I used the J breath during surges and didn’t use too much force pushing, I trusted my surges to birth my baby down. I found myself naturally using the calm breath and felt extremely relaxed almost unresponsive to conversation between pushes.

Within 3-4 surges out came my baby’s head, I found the opening flower visualisation really helped as it felt like I couldn’t go on. They say this is the hardest part, but looking back I actually found this the best. Hearing “his head is out” I turned my head and Jay said the look of excitement on my face was priceless. I knew I could do this!

One more surge and he was here. Our son was born at 2.58am, within 3 and a half hours! I can honestly say that was hands down the best moment of our lives and I will cherish it forever.

Levi Dexter Joyce, middle name in reference to his great grandfather that passed 3 years earlier. He coincidently was born on the anniversary of his funeral. That is a special connection that we hold so dear to us.

We did delayed cord clamping and the midwives allowed us to have skin to skin for as long as we wanted after birth. I did experience a second degree tear which I honestly didn’t feel at the time and one thing I wish I did was birth my placenta naturally. I got the jab which ended up making me feel quite sick and ended up passing a large piece that was missed  a few days later. That’s something I can definitely focus on next time.

I was nicknamed speed racer at the ward and the midwife said that it was an amazing birth, she also said when she has a baby that she hopes her birth is just like ours.  The hospital staff were talking about my birth and I was praised by everyone for my efforts which was really nice.

Jay and I are so thankful for the tools and techniques that you taught us in the HypnoBirthing course. I can honestly say that the relaxation consistently practised in the preceding weeks of his birth prepared us and our baby for his perfect arrival. He is such a chilled out little bub, very relaxed and we both believe it’s due to how relaxed I was through the whole process.

Although our water birth didn’t go to plan we were so happy with how our labour and birth panned out. Some would say it’s a perfect labour. We were not expecting what unfolded that night but we can look back and say that it was absolutely the perfect birth and a memory that we can hold close to our hearts forever.

I don’t refer to  my birth as traumatic or a bad experience. I don’t refer to it as painful or unbearable. I found it a powerful, spiritual, out of body experience. I learnt more about myself then I ever have in my whole life and have such a beautiful support beside me the whole way. I’m proud of my birth and I’m proud of myself. Not only for a natural, drug free, non-intervened birth, but the fact I conquered my fears and turned a scary experience into a beautiful one.

We are so grateful, Rebecca. You have given us so much to be thankful for.

A special thank you to Shannon and Jayden for allowing me to be a part of their journey and to share their beautiful birth experience with everyone!