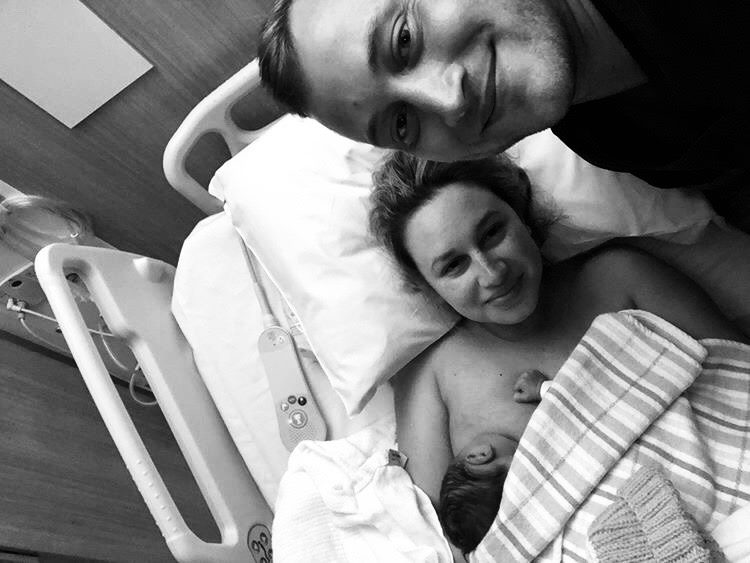 “I had my first surge around 9.30pm on Tuesday evening but thought it was intense Braxton Hicks. My husband and I went to bed shortly after and the surges started taking place every hour which is when I thought “hmm I think I’m in actual labour”. Luke and I managed to rest/sleep through until 4.30am and that’s when I went into active labour. I laboured at home in and out of the shower using my HypnoBirthing breathing techniques to get me through. We then made our way to the hospital at 10am, I had 5 surges in the 20 minute car ride to hospital. We walked through to the birthing suite where the midwife who I spoke to on the phone greeted us and said “ok yes you’re definitely in active labour” which I knew I was! I was 7cm dilated when I arrived which was amazing to hear. I laboured in and out of the shower, once again changing positions regularly and swaying my hips from side to side with Luke supporting me.

It got to about 3pm and my waters had not broken, my membranes were so thick bubs couldn’t break them alone. I had my waters manually broken and the surges became very very intense, lasting for longer with very short breaks in between. I was by then fatigued as I had felt the urge to push without luck for over 2 hours. At 4pm I asked for an epidural and the midwives said let’s wait till 5pm because I was so close. 5pm came around and there was no sign of bubs coming out any time soon due to his position. Boston was lying side on therefore he was having trouble coming through the birth canal. So the epidural was ordered and administered at 6pm, the epidural relaxed me completely and I dilated from 8-10cm in 30 minutes.

It was time to start pushing at 7.30pm, I was in tune with when to push and was using my birthing breath. Unfortunately, every time I would push Boston’s heart rate would drop. The midwife called the doctor and they decided we would try a suction cup due to Boston’s position. They said if the suction cup wasn’t successful they would try forceps. However, if forceps didn’t work I’d need an emergency caesarean and I had to sign the consent forms for this, which I was so hesitant to sign. I told the midwives and doctor that I really don’t want a c-section, as it didn’t make sense if I was 10cm dilated and the baby has already crowned! We headed down to surgery, the suction cup delivery didn’t work but the forceps did along with an episiotomy. Our beautiful baby boy was born at 10.22pm and has been all round a calm baby since he was born.

I don’t think I could have gone 21 hours drug free if it wasn’t for HypnoBirthing and even the midwives commended me multiple times through out the day on my efforts. They said that I was doing so well because of all the work I put in prior to the birth. For my whole labour I was informed and felt completely in control the entire time. Although my labour was long it was all in all positive experience.”

PrevPreviousShannon’s Amazing HypnoBirth
NextOne of my favourite births…Next
Copyright © The Mindful Birth Movement, 2021. All rights reserved.
Website made with