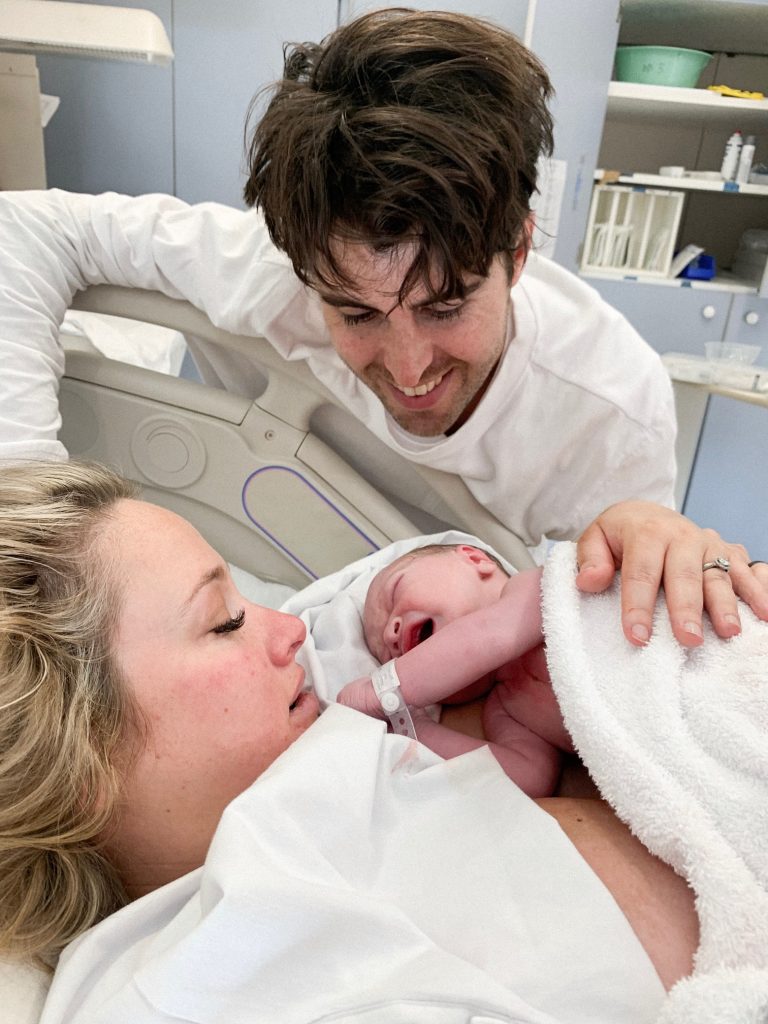 “After struggling with endometriosis, we were concerned conceiving may have taken us a while after being told it could take more than 12 months. We were so excited and grateful when I fell pregnant in the third month of trying with our beautiful boy. My pregnancy was a good one. Sure, there was some sickness early on, heart burn and back pain, but this to me meant my baby was doing well and I was still so grateful to be pregnant. I also had gestational diabetes, which ended up being a blessing. I lost weight and felt better being pregnant than I did before pregnancy and loved my pregnant body. My husband and I were both excited heading into the birth however wanted to arm ourselves with all the knowledge and techniques possible.

We looked into HypnoBirthing in particular because Chris didn’t want to feel useless throughout labour and HypnoBirthing covered techniques that he could use to support me. We liked calming breathing techniques, building confidence that our bodies are perfectly made to give birth, and learning rebozo techniques. And whilst we did feel that some aspects of the program weren’t for us, we had the confidence to take the pieces that were relevant to us and our situation. We really enjoyed the completing the HypnoBirthing Program with Bec from @themindfulbirthmovement, and were able to learn and take from the course what was important to us.

In the week leading up to my birth, I had an appointment with my OB on the Tuesday who told me I was 1cm dilated and gave me a stretch and sweep. I was booked in to be induced on the following Wednesday (due to GD and concerns related to my placenta), however was eager to try kick things off naturally myself. I saw an amazing Chiropractor/Kinesiologist all pregnancy, I visited him on the Thursday to help beat the induction date and he gently adjusted me and said I would be having my baby over the weekend. He showed me some additional pressure points to help bring on the labour. I spent the next few days bouncing on my exercise ball and pushing my pressure points whilst talking to my baby about joining the outside world. Friday morning I woke up at 3am with surges that continued irregularly throughout the morning. I went out for lunch with my in-laws, which I believe stalled my labour and things stopped. Once my husband was home we had some Indian for dinner, used the rebozo technique, massaged acupuncture points and continued bouncing on the exercise ball.

I was 39 weeks pregnant and all was going well with my pregnancy. The placenta was still nourishing the baby and he was growing well however as a precaution I was booked in on the Sunday for foetal monitoring. At 4am on Saturday morning the surges started again. They continued all day, they were still quite irregular however the surges were increasing in intensity. Throughout the day Chris was helping with the rebozo techniques, getting me comfortable with each surge and massaging my back. I called the hospital on Saturday afternoon as my surges were still irregular however quite strong so I spoke with the midwifes and it made sense to come in for monitoring on the Saturday, instead of the scheduled Sunday. At the hospital the surges were becoming stronger and stronger however still irregular. After a few hours they offered me some pain relief and if the surges went away it was considered practise labour, however they didn’t subside.

At this point, we were offered a room however decided to go home and put what we learnt at HypnoBirthing into practice, to make early labour more comfortable. It was Chris who really pushed this decision despite myself being inclined to stay in the hospital, as he knew that we would be more comfortable for us. Once home I had a shower, a light dinner and managed to sleep in bed in between surges until 1am before the intensity ramped up further. I was in the shower for an hour timing contractions and they were 3-5 minutes apart so we headed back into the hospital at 2am. Our HypnoBirthing skills played a big part whilst we were at home. We knew to relax as much as possible and breathing through each surge really helped, along with knowing they were only going to last a minute before I could rest. It was much more uncomfortable when I was tensing than when I was breathing and talking myself through them.

With every surge Chris continued to comfort me with the pressure points in my back, massage and also supporting my belly. Sometimes one helped more than the other and Chris was able to try something he learnt in the program each time to help me. When we got to the hospital, I had already progressed to 5cm dilated and was told my cervix was very soft and stretchy. I also requested an epidural upon arrival and then went back to sleep until 7am. My OB came in at 8am and I was 7-8cm dilated and broke my waters. Around 10am my epidural had stopped working and I was in a lot of pain. I didn’t want to use the gas in my labour as I wanted my mind present however we decided to give it a go while they sorted out the epidural and if I didn’t like it I could stop.

Throughout every surge Chris was by my side, holding my hand, talking me through each surge and encouraging me. He was my voice throughout the labour while I focused on breathing and birthing our baby. Throughout the entire labour Chris was my voice, we had discussed our preferences and I didn’t have to worry about anything except birthing our baby. I could feel my babies head pushing lower and lower into the birth canal. After the epidural kicked back in my OB did another examination and the babies head was in place and it was time to push. I just remember Chris telling me it was time to meet our baby and I started crying.

After the first surge that I was pushing the baby became a little distressed so they popped the vacuum on his head and with two more surges our beautiful baby boy Boh was born happy and healthy at 12:14pm on Sunday. Overall, we were both really happy with our pregnancy and birth experience.

We aimed to surround ourselves with positives and steered clear of negatives, which allowed us to embrace the GD, morning sickness, and anything else that would pop up. We felt really lucky to be able to both pick out our own obstetrician and hospital, who we had a great supportive relationship with, and to also be able to do the HypnoBirthing course to compliment everything the hospital offered. I knew early on that I would probably like an epidural and was really comfortable with that decision, however I was so happy to be able to labour at home as long as I did and be in such a great position when we arrived at hospital (I definitely put this down to the HypnoBirthing course, even the midwives were surprised how well I had dilated). Chris definitely would not have had the confidence to strongly suggest that we should go home instead of remain in the hospital on the Saturday, without having completed the HypnoBirthing course. The key points that we took from the course played a big part in our experience, and we would strongly suggest to any of our friends or family that are having a child to undertake the HypnoBirthing Program with Bec!”