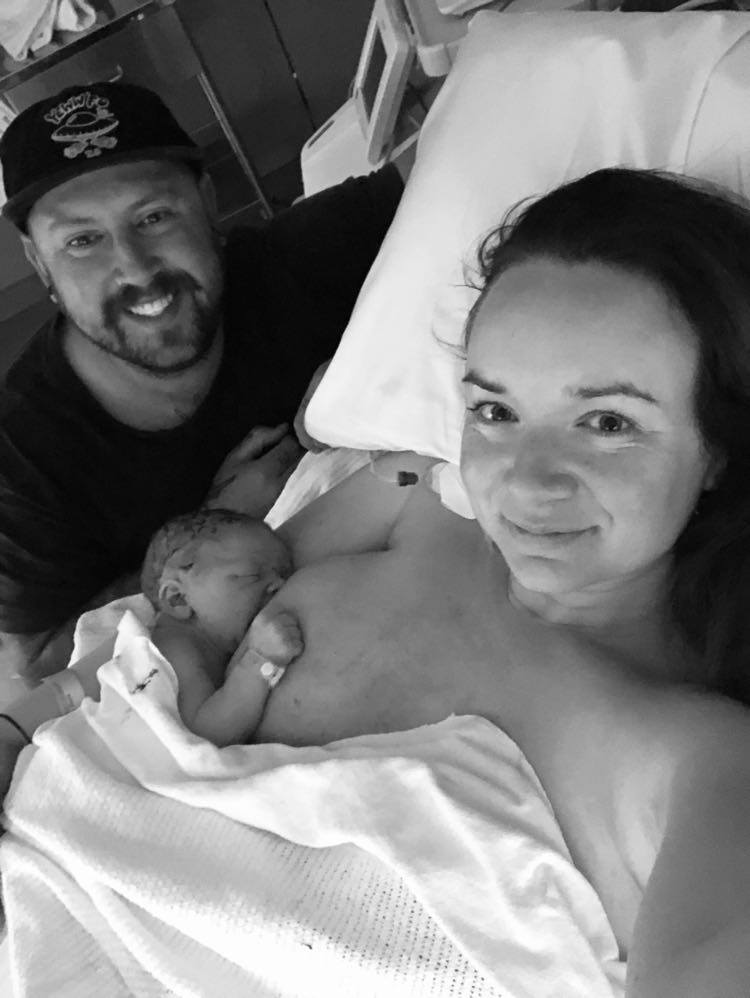 Casey completed the HypnoBirthing Program after experiencing a traumatic first birth that ended in an emergency c-section! She achieved an amazing and positive VBAC and I feel so blessed to be able to share her story…

“Wednesday night I went to bed early feeling a bit sore and achey, I had a feeling I was going into labour and mentioned it to Andrew before we went to sleep. I woke a few times overnight feeling a bit sore but at 3.30am woke to a surge and knew straight away. I laid in bed for a while and waited for more. They were coming every ten minutes for 1 minute but still quite bare-able. I tried to go back to sleep but I was too excited. I got up and had a shower, something to eat and called the midwife to let her know. Andrew woke up at about 6.30am and I told him I was having surges. It continued exactly the same way, 1 minute contractions 10 minutes a part till at least lunchtime.

It was such a beautiful sunny day, I had spent some of the morning sitting outside eating watermelon and watching my son, partner and mum play. When I started to get too sore I would head inside to rest and listen to my affirmations or music. The surges started to get more intense and were coming every 6-8 minutes. We called the midwife in the afternoon and she asked how we felt about coming into the hospital to have a chat and do some monitoring. Being a VBAC we had discussed that fetal monitoring would be a safer option but that cordless monitoring would be our preference. The car ride in was more difficult, I used the TENS machine during each surge and had music playing on headphones. We met our midwife and discussed what was happening, she asked if I wanted to be examined, after discussing it and agreeing she explained I was 2cms dilated but my cervix was thinning and labour had been progressing and helping it along. She was mindful that we had to be careful, and didn’t want to have me labouring too long because of the risks with a VBAC but also wanted to give my body a chance to progress without too much interference. We talked about a few options and I asked her to give us 10 minutes to talk about it. Together we decided she would break my waters and see how things progress.

Instantly the surges came more often and much more intense. I used a mixture of the TENS, shower, heat pack, affirmations and Andrew set up candles, lights and music. The surges were becoming very intense and I was starting to struggle to stay relaxed. The midwife asked if I wanted to try some gas, but with my past experience labouring with my son I really wanted to feel like myself and without drugs. At about 11pm I opted for an epidural (which I had previously decided I absolutely did not want because of my first birth, but had a serious chat with the midwife and Andrew and decided it could give me a chance to rest and relax) and it worked exactly as I had hoped. She gave me an IV of fluids first and watched Alby’s heart rate the whole time, reassuring me that he was safe and content. I was 3/4 cms at the time of the epidural and then by 4am I was fully dilated. The midwife told me she would be back in half an hour and I could start pushing… it took me 15 minutes of throwing and whisper yelling at Andrew to get him to wake up!

But 15 minutes later the midwife was coaching me how to push as I could not feel the surges from the epidural. After about 45 minutes the epidural started to wear off and I could feel each surge come and go and had a better sense of what I needed to do and how I needed to push and breath. I was making progress but after an hour and a half Alby was starting to get distressed and I was losing energy. The midwife said we had 3 surges to give it my best push. Andrew was by my side and every push I heard him gasp as he could see the head more and more. The doctor gave me a small episiotomy on the 3rd surge and Alby’s head was out. One more push and his shoulders were coming. The midwife asked if I was ready to grab him… and I pushed and reached my hands down under his arms and pulled him onto my chest. Andrew was crying and looking at me like he couldn’t believe what was happening, and I just laid there in shock staring at our boy.

We got skin to skin for about 2 hours and he latched and fed straight away, did a bit of a crawl to the boob with some help from me. He was so so quiet and content. Andrew had to leave about 2 hours after… and back that night at 5pm for a 2 hour visit. It was by far the most amazing experience of my life and I will be forever grateful for my partner Andrew, my beautiful midwives, and the guidance and support from Bec to bring our boy safely and happily into my arms.”